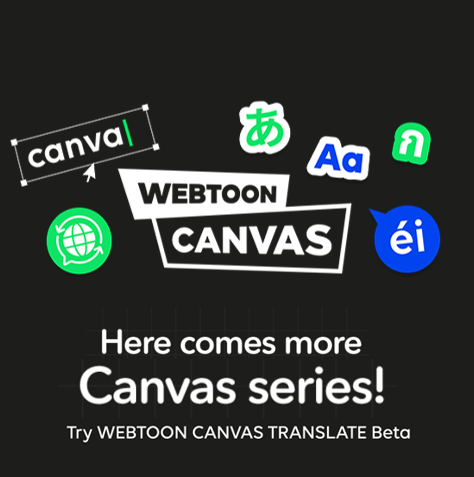 After the Beta period is over, we'll have some preparation period and official CANVAS TRANSLATE service will be launched later!

During the Beta service period, only some CANVAS series from US WEBTOON service are available.

But after the official service is launched, much more CANVAS series will be available​ in WEBTOON TRANSLATE.

Plus, for the users who want to know more about CANVAS and CANVAS TRANSLATE Beta Service,
we prepared Q&A section below, so check it out!
Q : What is CANVAS?
A: CANVAS is WEBTOON’s open platform where anyone can publish and upload their works anytime.
Creators can freely share their stories with millions of global readers!
Translate CANVAS series, and be the part of a scene. :)

For the users who want to know more about CANVAS, here’s the link.

Q : Which, and how many CANVAS series are available during the BETA period?

A: As we said above, there will be some CANVAS series from US WEBTOON service for the BETA.
But after the BETA period is ended and the official service is launched, series from the other official services (ex : Spain, Indonesia… etc. ) will be available too!
So stay Tuned! :)
Q : Is translated CANVAS series also available other than WEBTOON TRANSLATE PC website, such as WEBTOON app, or mobile web? 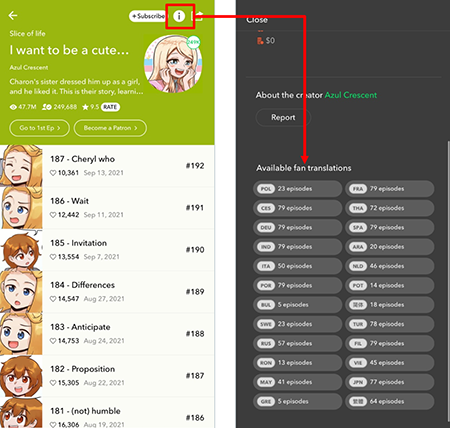 A: Yes! 100% translated episodes will be​ shown on WEBTOON mobile app/web, and PC web!
So you can enjoy translated versions in both WEBTOON and WEBTOON TRANSLATE.
For the mobile app/web, click the 'information' button at the top right in each CAVNAS series' page, and you may find 'Available fan translations' menu.
Select the language you want, and enjoy!
Q : I would like to contribute, is there any differences or special rules compared to translating Original series?
A: Nope! Same as Original series, you can freely translate CANVAS series into the language you want.
But, if the translation is different from the meanings what original author intended, it might be edited or deleted.
We ask for your understanding, so that the meaning and context author intended can be well conveyed.
If there’s any questions / errors / suggestions about CANVAS TRANSLATE BETA service,
please let us know through ‘Feedback’ channel, or send the email via 'dl_webtoontranslate@webtoonscorp.com'​
We are always glad to hear the voices from our users, and thanks for your interest to our service and WEBTOON. :)
Now, let's connect CANVAS series and global WEBTOON fans in CANVAS TRANSLATE BETA!
We hope you enjoy it! :D
Best Regards,